Still waiting for my PCBs with no news that they've even finish fab yet, let alone been posted from the US... :(

I've started to revisit some of my demo source code from last year, but I still think I'd rather be playing with hardware!

So, it's been 10 days since I sent my prototype board off to be made up. I guess I've got at least another 2 weeks to wait, so it'll be a bit quiet here for a while.

I was pointed to this blog which is pretty interesting and talks about some similar timing and signal noise problems to what I used to see on one of my earlier PCBs: Veronica - VRAM.

Also, over the Easter weekend I went to Revision in Saarbrucken. Unfortunately, I'd spent so much time designing this PCB that I'd not had chance to code anything demowise, but it was still nice to pull out the assembler and do some pure software development over the weekend. I've found away to speed up something I http://www.blogger.com/img/blank.gifwas working on last year, although ihttp://www.blogger.com/img/blank.gift'll involve a lot of meticulous cycle counting.

There were 2 very good demos by Benediction, and I also spent a while chatting to these guys which was great as it's the first party I've been to where I've actually found any fellow CPC coders! Krusty also gave an overview presentation on the CPC which will have helped to make more people aware of the CPC. Anyway, their demos are here (and both came 3rd in their respective categories too which was aweseome given the competition):


and Stop that nyan cat!:


One final project that was phenomenal was lft's Parallelogram demo running on an FPGA that won the wild competition:


I had a few good conversations about my FPGA here too - it seems a lot of people are interested in this.
Posted by Ralf at 08:49 No comments:

Just posted a summary of anticipated specs over at CPC wiki:

The specs are still a bit in-flux at the moment as it'll largely be a case of what I manage to get it to do. Basically, I "needed" to build my own board because I ran out of gates on my Actel evaluation board. On that, in 250K gates I had equivalent to a 464 and the off the FPGA, I had a 512KB memory chip providing 256KB RAM and 8 ROMs. Sadly, I ran out of gates before I could do a disk interface or any "plus"http://www.blogger.com/img/blank.gif features. The gate counts are a bit lower than some of the other CPC implementations on FPGA because I decided to do it all myself apart from the T80 core and I was treating this project as a learning exercise in how to write efficient VHDL.

This board has 400K gate Xilinx FPGA, a SCART socket, an SD socket on the underside, 2 seperately wired joystick ports (so no clash), 2MB flash and 512KB RAM, tape in, 14 GPIO pins, 12 IO pins wired directly between FPGA and AVR and an additional 4 FPGA and 4 AVR pins that I thought could be jumpered together together to allow AVR access to the SD card or provide a header to a different SD card socket or just used as more GPIO. Additionally, as I'm still experimenting, the AVR clock can be jumpered to run from an FPGA output and vice-versa.

Connecting a standard CPC keyboard directly would be possible because there are just about enough GPIO pins available, but I'll probably make a breakout board that somehow multiplexes the 10+8 keyboard lines to the 8 GPIO header next to the joystick ports. I must admit, putting this thing inside a real CPC keyboard is something I'd like to do too... :)

Regarding the pin 5 (and also pin 9) on the joystick ports - I thought about what to do about these, whether to make them IO, put 3.3V out on one, etc but I decided it was best to just to stick to Atari joystick with second button. I don't think I've ever seen a 3 button joystick. The only thing I could think of would be the AMX mouse, but that'd probably require 5V and level converting all the lines, so it'd be easier just to implement mouse via the PS/2 socket (and maybe do a second PS/2 socket on a later version of the board).

Despite it's CPC bias, I guess it could also be used as a generic FPGA development board that just happens to have 2 joystick ports, PS/2 keyboard and a SCART socket with 3x 2 bit DAC.

In terms of CPC "hardware" features I want to add, the 2 main features I want are hardware emulation of the CTM monitor so that horizontal smooth scrolling works on LCD TVs, and saving the last frame to memory so that the display can be "paused" when debugging, like the software emulators do. Basically, I'd like it to be as nice to develop on this hardware as it is with a software emulator. Additionally, I believe I can get the SPI chip running quickly enough to to random access, which would allow 128 ROMs.

I was also working on a simple software flash filesystem that operated like |DISC, although I put that on hold while I designed the PCB.

Well, it's probably not final, but I've just submitted this board for a quote. The colours are a bit different to the last one - this is taken directly from the gerbers and Gerbv seems to choose random colours each time you load a layer!

Anyway, I've tidied it up some more, added ground planes, a power LED and put some text on the silkscreen... 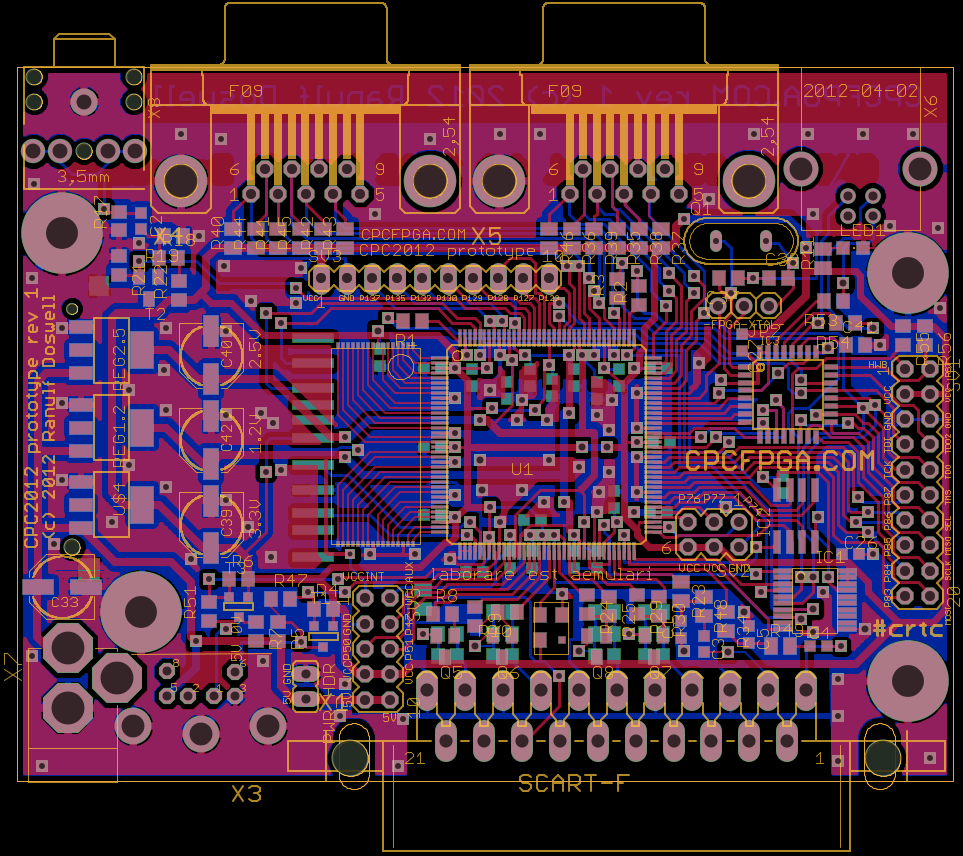 It'll be good to think about something other than PCBs for a while... :)
Posted by Ralf at 19:30 No comments:

Well, I've spent a long time on this, but I think I'm pretty happy with the layout now. Tomorrow, I'll hopefully resize all the power lines a bit and add some ground planes... 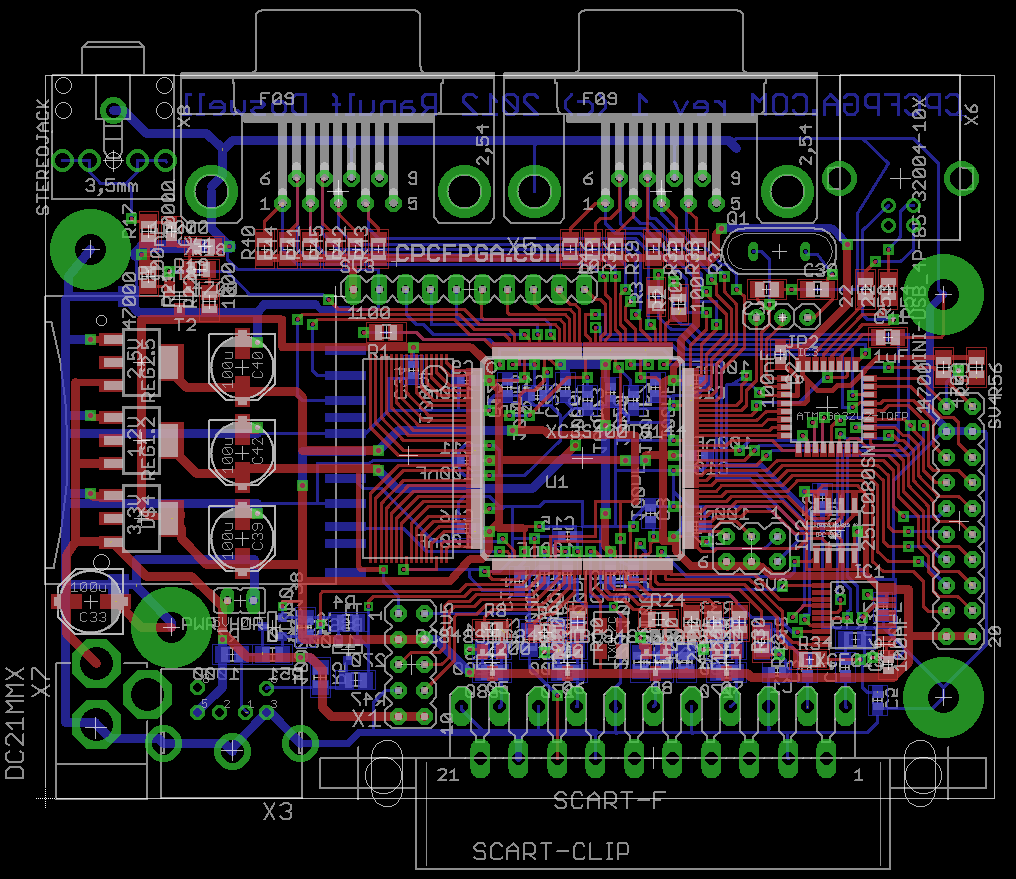 I'm amazed how long PCB design takes... Still, the end result should be good. It's got scart, 2 joysticks, tape in, USB (with about 10 dedicated pins to the atmel which should provide serial, misc I/O and JTAG), PS/2 keyboard, SD card and a bunch of expansion headers offering 14 I/O. Additionally, there's another 4 lines from each of the FPGA and atmel tied together so the atmel can access the SD card via the JTAG which could also be used as general purpose I/O.

Let's hope that when I get this board made it actually works...
Posted by Ralf at 01:05 3 comments: